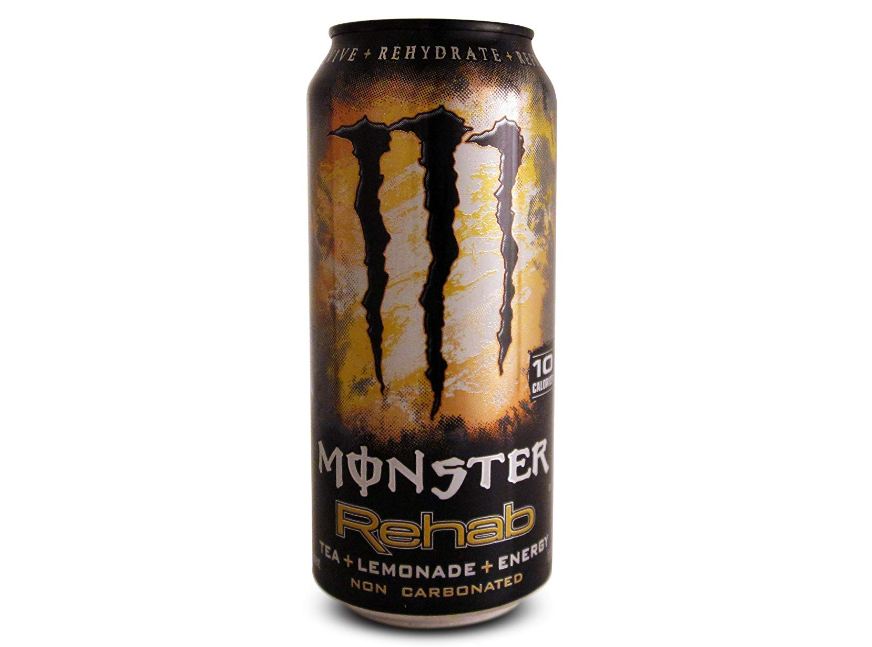 Lemonade:
As I opened the Rehab can, I got the very refreshing scent of lemons, very close to that of RS Recovery. The taste was so refreshing. First there’s no carbonation, which made the drink very smooth and almost too easy to drink.

As Monster Rehab crashed over my taste buds, I got a wonderful lemonade taste.Yet where was the tea taste? After a rush of lemonade, I began to get a little hint of the tea towards the end, not very strong, almost a afterthought, yet enough to be present and refreshing. Not quite 50⁄50 lemonade tea, more of a lemonade with a hint of tea, yet still very good.

I must say I was quite disappointed when I read the flavor was green tea. I’ve never been much for the green tea flavors on the market, but I gave it a try. Remember all that stuff about green tea? Throw it out the window.

This Rehab, like the original is very smooth with no carbonation. As I did get a bit of tea flavor, it wasn’t too much “green tea” flavor. No hint of bitterness or being to sweet. The taste was just very refreshing and just right.

I myself am a big fan of the orange flavor, so getting my hands on this Monster has more than exciting. Popping that orange Monster tab on the top of the can produced a sweet orange aroma, only peaking my interest even more.

Yet that first taste wasn’t quite what I expected. As it’s very smooth with no carbonation like all Rehabs, their was only a slight orange flavor, then followed by a pineapple taste. By no means am I complaining, I just wasn’t expecting the pineapple.

The orange to pineapple flavor was a very good transition. I did not get any taste of the tea flavor that the outside of the can says it includes, but with the very pleasant Orange/Pineapple taste it was by no means missed.

Rojo Tea:
Not knowing what Rojo was, I honestly can say I didn’t know what to expect. As I popped the top and took that first taste, I couldn’t really pinpoint the taste. This Rehab seems a bit sweeter then the others, but not overly sweet.

The flavor comes from a blend of Rooibos tea, which is used to make different types of herbal teas and is praised due to its high levels of antioxidants. Add a splash of cranberry juice, and you have a taste unlike any other drink on the market. Another hit for Monster…

Monster Rehab Energy Ingredients As for ingredients, Rehab is much different then any other energy on the market, so pay close attention.

Yet, Rehab still is an energy drink, so it still has the usual suspects taurine and ginseng along with a bit of Vitamin B for safe measure.

After drinking the entire can quite easily, it wasn’t to long before I began feeling a little Monster Rehab Energy Drink rush running through my veins. There isn’t much sugar in the can (6 grams) so I didn’t get jittery, but had a solid feeling of alertness that lasted a bit over 3 hours with no sign of a crash. However, I didn’t drink rehab for it’s intended purpose which is to help with a hangover.

After waiting so long for this energy drink, I thought the only thing it could do would disappoint, but I was wrong. I truly think Monster hit a home run with Rehab. I wasn’t sure I could love anything like RS Recovery, yet with the hint of tea, I believe Monster Rehab just upped the game. Also for all you drinkers who wake up with a hangover, give Monster Rehab Energy Drink a try. It should do wonders for that headache and get you back on your feet quickly.